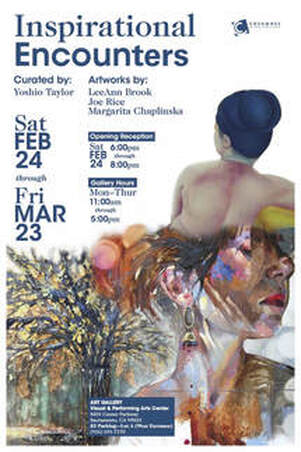 JOE RICE (Joseph Flavius Rice) was a prolific and skilled artist who continued to explore artistic expression into his eighties. He left a considerable legacy (paintings, sculpture and jewelry) spanning close to five decades. An abidingly humble and private man, he never pursued recognition for his work, yet he took his vocation very seriously. Rice was a public high school art teacher, an inventive artist, the father of four children, and a self-proclaimed "overeducated pauper." He lived  in and around San Francisco, raising his children during the sixties and seventies - a magical place at a magical time. THE RELUCTANT ARTIST, equal parts biography, memoir and art book, was written and compiled by middle daughter, Dorothy Rice.

Through vivid scenes matched with full-color reproductions of his work, she recounts tales of her father's lifelong commitment to art, his disquieting tendency toward solitude, his unease with useless conversation, and his self-effacing manner and adherence to humility as the highest virtue. Though he made art all through his life, Joe Rice never sought recognition or financial profit for any of it. Near the end of his life, his three daughters became increasingly fascinated by and attached to his work, chronicling, photographing the art on his walls, and discovering a cache of paintings that had been stored in the garage rafters for over twenty years. Through his art they attempted to better understand their father's hidden truth: though he never sought to make a living from his art, art gave him his life. And having left so many tangible remnants he will live on in more than memory.

Following his death and the publication of THE RELUCTANT ARTIST, his daughters facilitated a posthumous debut for their father, a gallery showing of their father's most iconic paintings - large canvasses in his signature mashup of hard-edge techniques and surrealistic imagery. (Blog post with photos from the exhibit.)

Middle daughter, Dorothy, established the website, www.josephflaviusrice.com, to serve as a virtual archive her father's art.

Other publications inspired by Joe Rice and his enduring artistic and personal legacy:
"A Painting a Week," The Rumpus - "The Paintings in the Rafters," Still Point Arts Quarterly - "From Fiction to Memoir," Brevity - "Tianjin Daughter," Proximity Magazine

​Praise for THE RELUCTANT ARTIST

"​Dorothy Rice has not only written a memorial for her father, she's established herself as a different kind of artist in her own right: a gifted writer who, in eloquent and delicate prose, reveals the joys and costs of being an artist. Visual, emotional, and insightful, this book is a must read.​"
~ New York Times bestselling author Emily Rapp Black, author of the memoirs Poster Child and The Still Point of the Turning World

"Joe Rice might have been a reluctant artist, in the sense of one who works outside the public eye, but it's clear that making art was what he most wanted to be doing. His artwork provides intimate histories-the many self-portraits, the depictions of domestic spaces and acute observations of daily life. But-and like his own complicated family background-his work, with its use of hot color, non-perspectival space, and intricate patterning, also complexly alludes to histories of diaspora and internationalism, speaking to multiple sources from Mughal miniature paintings to Native American organizational forms. Rice's intricate weaving of the intimate with the expansive, the familiar with the experimental-and he was always trying out new things-is what art does best, rewarding those who look closely. Who better to guide us to look more closely at a father who is an artist, than a daughter who is a writer?"
~ Allan deSouza, Chair, Department of Art Practice, University of California, Berkeley

"Joe Rice tackled diverse modes of art making throughout his long career in the San Francisco Bay Area. The exquisite highs and lows of the practice were central to his life to the exclusion of any effort to find an audience for his work.  Such a curious and passionate man deserves our notice."
~ Jim Melchert, Professor of Art Emeritus, University of California, Berkeley 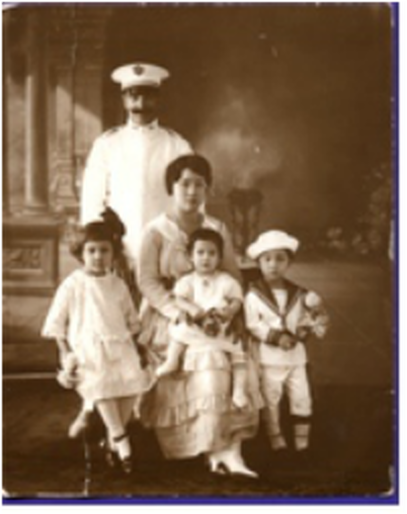 Joe is the baby on Esther's lap.
JOE RICE (Joseph Flavius Rice) was born December 24, 1918 in Manila, Philippines (elder siblings Ruth and David were born in China). With his mother Esther (Chin, of Tianjin, China) and sister Ruth, he immigrated to the United States as a young teen (older brother David remained in the Philippines to finish high school). Joe junior graduated from San Francisco’s John Swett Junior High School (1934) and George Washington High School (1937). At the time of the 1940 census, he was 21 and living with sister Ruth and mother Esther in San Francisco.

Joe’s father, also Joseph Rice, was born in Hungary in 1882. He reportedly left home as a teen to join the merchant marines. In a 1963 interview for an article in Pacific Stars and Stripes, the senior Joseph Rice said that he, "began his uniformed career in the French Foreign Legion in 1899." A colorful and adventurous figure, he spoke numerous languages (including, by his own count, English, Chinese, Japanese, Tagalog, French, German and Hebrew), languages acquired through his travels and military assignments. It is presumably while he was assigned to the American Expedition in Tianjin that he met his Chinese wife, and, according to family lore, married her and “named her Esther.” He served in some capacity in the United States military prior to the first World War and during both World Wars I and II. After resigning his military commission the senior Joseph Rice bought a farm near Manilla , and served as chief of the harbor police.

During World War II Joe Rice served with the U.S. Air Force as a ground radio operator, in Italy. Prior to shipping out he graduated from the University of California, Berkeley (1943), where he majored in art and English. He married first wife June, also a Berkeley graduate (anthropology) in a group ceremony along with several other inductees during basic training. According to June, they met when Joe came to the Berkeley rooming house where she shared a big attic room with four other coeds; he was looking for one of the other girls, a vivacious blonde; the other girl wasn’t there and Joe and June got to talking.

After the war and while working as an art teacher in San Francisco (Everett Junior High School and then Roosevelt) Joe earned a Master of Fine Arts Degree (1958) from the College of Arts and Crafts. He continued taking art classes at the San Francisco Art Institute and then at Santa Rosa Junior College after retirement.

Joe Rice was a skilled and prolific painter, sculptor and jewelry maker. He studied, practiced and experimented with art into his eighties, when a series of strokes, a botched cataract operation and debilitating arthritis in his hands diminished his mobility, eyesight and manual dexterity. He died March 7, 2011 at the age of 92 in the peaceful Sonoma home he shared with his second wife.

Joe Rice is remembered for many things. His art. A dry, wry sense of humor that often went unnoticed or understood. The quiet competence he brought to any task. And, perhaps above all, his abiding humility—Joe could do many things well, yet he let his accomplishments speak for themselves. He is survived by his wives, his four children, two stepchildren, ten grandchildren and, as of this writing, seven great grandchildren.