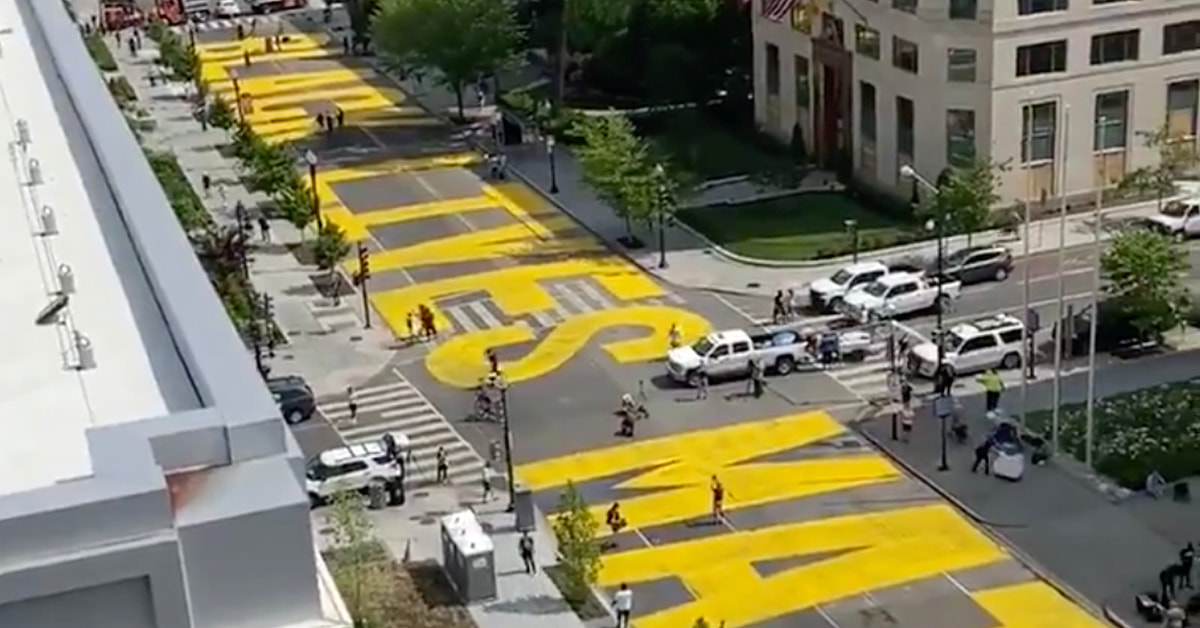 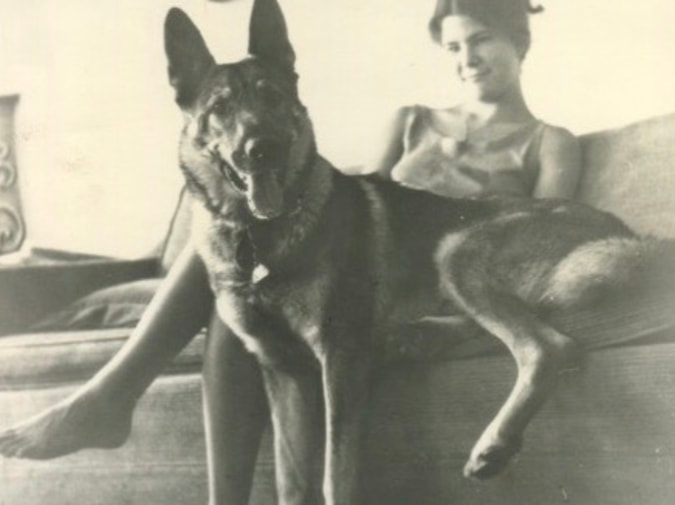 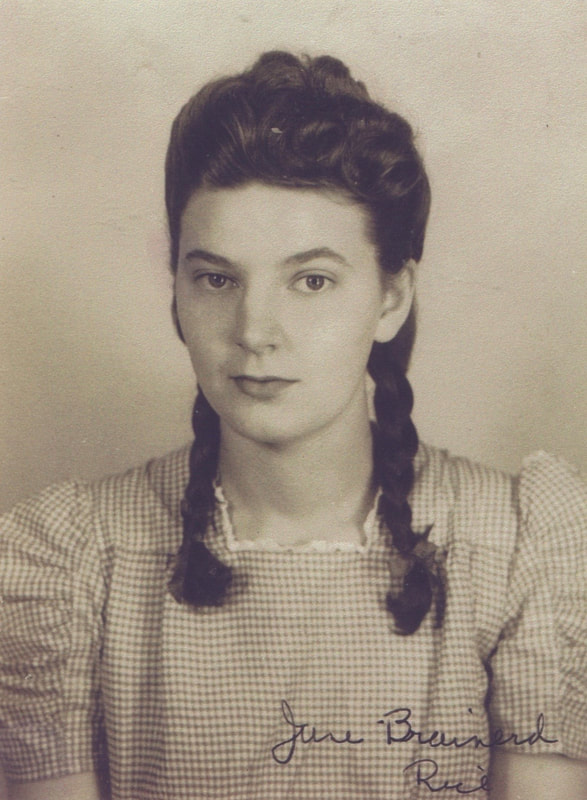 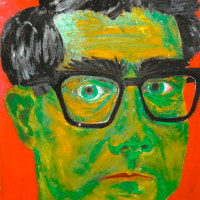 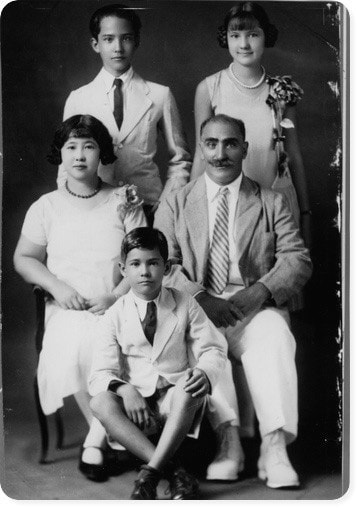 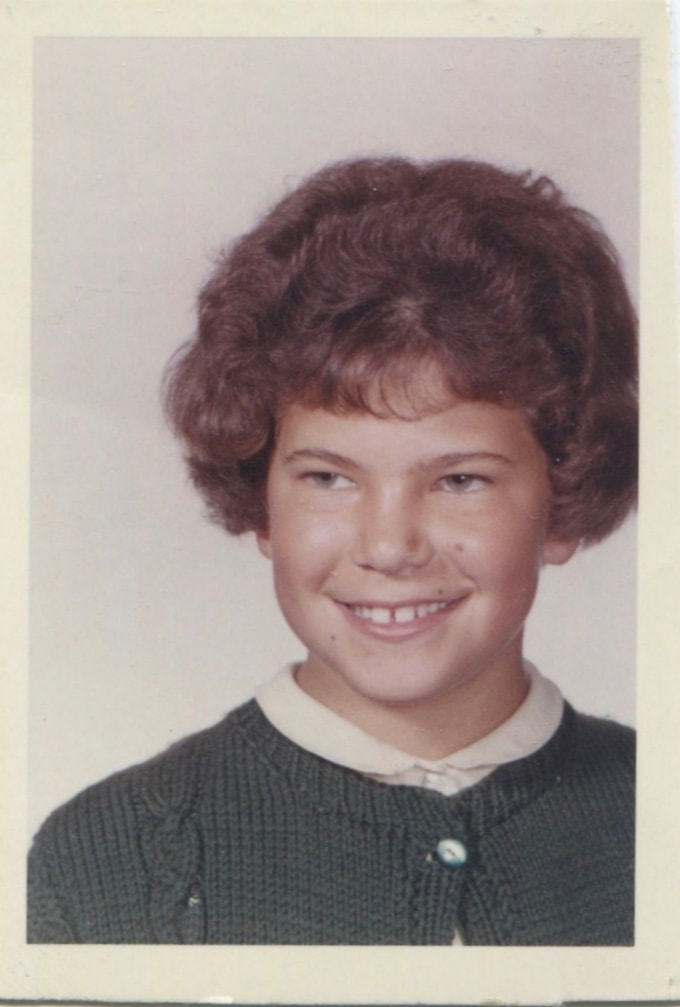 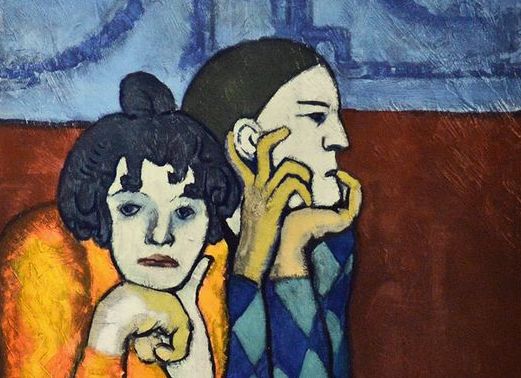 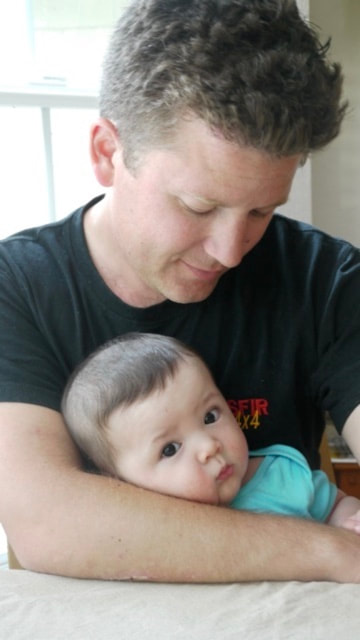 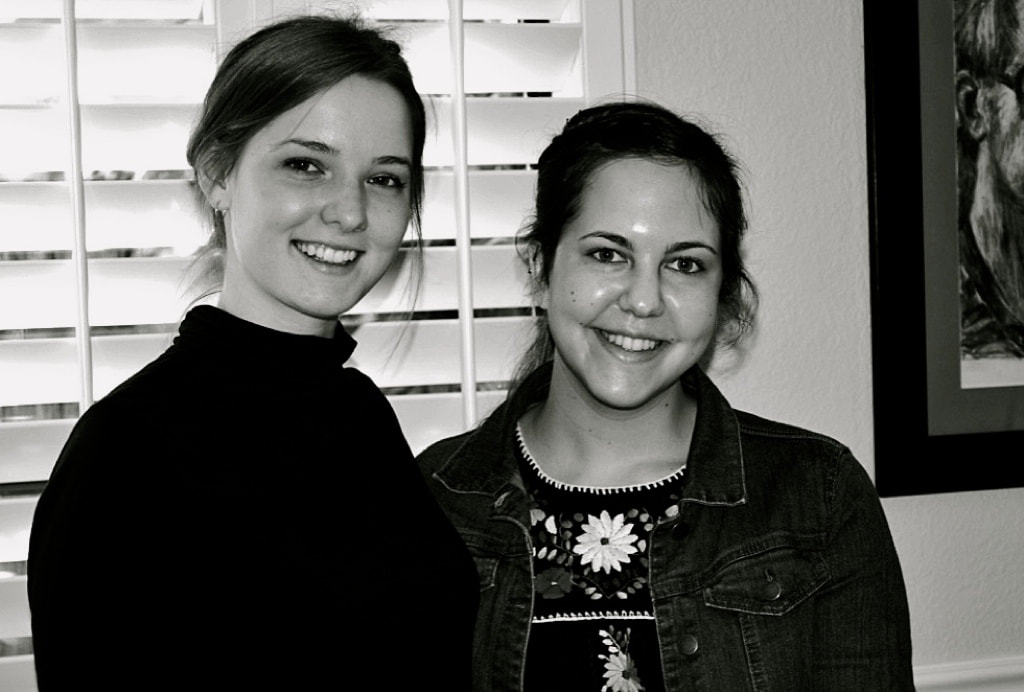 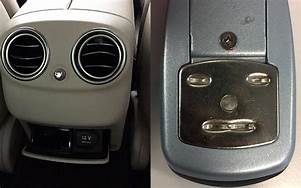 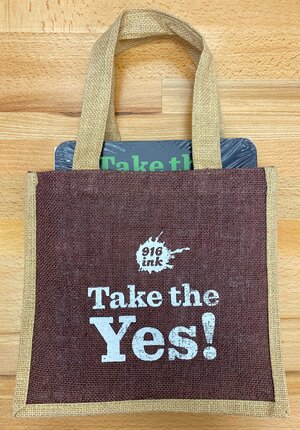 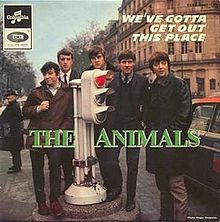 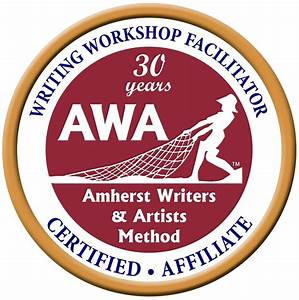 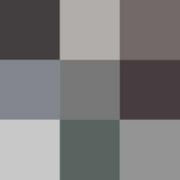 What was that feeling last night, of chasing a thread of thought from sleep to wakefulness, back into sleep again, not quite sure at any moment whether I was fully awake or fully asleep and only knowing when I got up to use the restroom and perhaps not even then and what was I doing, trying to string some thoughts together, lines of an essay, a poem, was I really and did it make sense at all, for now all I remember is peanut butter, the taste, the feel of it in my mouth, as a paste, a binder, literally and also in life, holding things together, and I remember saying to my night self, self, you should remember this, you should write this down, but it was 1:30 when I peered at the clock and then 2:30 when I peered again and I didn’t write it down and now it is gone or was never there at all and what stuck is the peanut butter, the sense that it was important, but also the least of it as I chased words, phrases around and around and then reflected, in my sleep, or half sleep, but what is it about, surely not peanut butter, which is only the metaphor, the trigger, the something, yet it’s all that remains and perhaps I was only craving some peanut butter and what more can, should, be said about peanut butter when it, or anything, keeps you up at night.

No longer accessible via the internet - 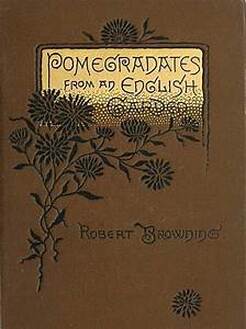 Female author
Written while young, preferably under 25, 30 tops
Short, but not too short
Clever, but not too clever

The last two criteria apply to the poem, not the author.

Mom was out back pulling weeds. My sisters were playing “Mother-May-I?” on the lawn. Finally, some privacy. ​
I snuck into the living room. Pulled a musty old book from the shelf. Mother’s English Poetry of the 19th Century. With the book under my arm, I tiptoed down the hall to the bedroom I shared with Roxanne and Juliet. My sisters got their names from Cyrano de Bergerac Shakespeare and. Mine was my grandmother’s. Life was so unfair.

From my bed by the open window I could keep an eye on them all. Mom bent from the waist to pluck a dandelion. Her dress rose up, revealing her slip and the backs of her puckered knees. I wished she wouldn’t do that. The neighbors could see over the fence. Parents were such an embarrassment.

I opened the book and flipped through its dusty pages, thin as the Bible’s. Wriggling my bare toes in the tufted chenille bedspread, I searched for the perfect poem. I must have skimmed hundreds.

Women were hard to come by. And none of their poems met my requirements. They were too long, too mushy, or they were full of weird words, ones the teacher would know I would never use. Lots of thee and thou, whence and wither, and way too many apostrophes.

“Weenie,” Roxanne shouted up from below.
My middle name is Rowena. Roxanne made sure the whole world knew it.
“I know you’re up there, Madam Oscar Meyer wiener. You better not touch anything of mine,” she said. “Or else.” 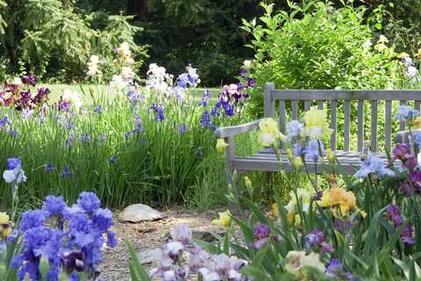 I could see her raised fist without looking. It was near impossible to be creative in a house full of cretins, one of my father’s favorite words. But what choice did I have? I got back to work.

Just as I was about to give it up, I stumbled upon the perfect author and her perfect poem about an English garden. A stream meandered through it. The water gurgled or babbled. Something poetic. Trees and flowers shone in dappled sunlight. And there was a bench. No, it must have been a swing. An empty, weatherworn swing that swayed. As if a child had just hopped off. I could feel it. I was that long ago girl.
​
My poet was no Elizabeth Barrett Browning or Edna St. Vincent Millay. Not that I knew who they were. But they had written lots and were presumably famous, while my poet had only one entry in Mom’s fat leather book. A poem so modest I almost missed it. And like her one poem, her life was short, which seemed tragic, yet romantic too. I was nine.

I read it through a couple times. It was possible, I thought. With a few tweaks, it would do. I copied her poem onto a yellow pad. My cursive was round and loopy then. I used little o’s to dot my i’s. A year later I would realize how lame that was. Some girls never do.

Then I got to work. I scrutinized every word, line and stanza. Any words that sounded too English or too old had to go. No tarry. No naught or nary. My dead poet’s ethereal arbour became my dreamy garden. The title, which I think was something like “Ode to an English Garden”, became “The Empty Swing.”

I copied my doctored poem onto a fresh sheet of paper.

It was 1963, a year before my sisters and I lay on our stomachs—heads in our hands and inches from the television—to watch the Beatles first appearance on the Ed Sullivan Show. Martin Luther King delivered his “I Have a Dream” speech on the steps of the Lincoln Memorial that year. President Kennedy was assassinated in Dallas. My fourth grade teacher covered her face with her hands when another teacher brought her the news. We went home early that day and watched it on TV.

After I turned “The Empty Swing” in to Mrs. Burns, I forgot all about it. Until the letter arrived.

When I handed it to my mother she turned it over in her hand, seeming to weigh the letter on her palm before she knifed the envelope open. After she read it, she patted the couch cushion beside her. I sat. Close but not too close.

“The Empty Swing” had won a citywide poetry contest.

I remember mother’s pale blue eyes, appraising me as if for the first time, a pucker of pride and surprise on her mouth, and the catch in my stomach, the sick feeling of tumbling down a well, of never landing. I must have known this could happen when Mrs. Burns said she was entering all our poems in the contest. Mine was good. After all, I’d found it in the big book with Edith and Edna.

For all the effort I put into finding and tweaking that poem, I could have written one of my own. But I didn’t know that then. Poetry scared me. Besides, once I’d gone to all that effort and written my name at the top of the page I sort of forget it wasn’t mine.

There was a fancy lunch downtown and speeches to honor the winners. Mrs. Bumble, the new Language Arts teacher, drove me there. She was tall and bony, all sharp elbows and knees.

“Such a lovely poem,” she said. “Just the right number of words and syllables. Neither one too many nor one too few.”
Mrs. Bumble enjoyed the sound of her own voice.
“I imagine you meant something very personal with that empty swing. Didn’t you, Dear.”

She peered at me over the tops of her reading glasses. I peered right back. I couldn’t tell her what I was really thinking. That she looked like a praying mantis and that if she had half a brain she’d realize I couldn’t have written that poem. But she didn’t see. No one did.

She smiled and patted my hand.

“You, young lady, must join me in the Language Arts program,” she said, as if her stupid program was Shangri-La.

Language Arts was something new at our school that year. This was before the Gifted and Talented Program that began in the public schools twenty years later. My mother said I was chosen because I was smart. But I knew “The Empty Swing” was to blame.

My two best friends before that year, Debbie O’Leary and Debbie Feinberg, were not happy I was picked for Language Arts. They said their grades were as good as mine, and their penmanship on the faded mimeograph sheets neater. All of which was true.

Debbie O’Leary had long, glossy hair held back by a satin ribbon and freckles across her turned-up nose. Her father was a cop with a poufy hairdo and a thin moustache. My mom said he looked like the singer Robert Goulet. Her mother wore a checkered gingham apron and cut the crusts off white-bread sandwiches. I was never comfortable at her house. There was something scary about the rumpus room down the dark flight of narrow stairs. Even so, I believed they were the perfect TV family.

Debbie Feinberg was small and scrappy, with spindly legs, long arms and short, curly hair. When she spoke to her mother, who had numbers tattooed on her arm, they shouted at one another as if there were a river between them.

Debbie O. snickered when Mrs. Bumble came for me that first Wednesday afternoon.
“Language farts,” she said, under her breath.
“Yeah,” Debbie F. said, arms crossed over her skinny chest. “My mom says even if they asked me, I couldn’t go.
“Mine too,” said Debbie O.

And that was the end of the Debbies. I blamed that stupid poem.

Until I graduated sixth grade and moved on to A.P. Giannini Junior High School, my poem and the award I won were on display in the locked, glass cabinet outside the principal’s office. I had to walk past it every day when Mom dropped Juliet and I off for school. “The Empty Swing” was mounted on a sheet of red construction paper with a gold foil ‘first place’ sticker like a jagged sunburst at the bottom of the page. I pretended it wasn’t there. But it was. The first few months, it seemed as if Mrs. Burns mentioned it a million times. Which did not win me any new friends.

As the months passed, the red paper faded to a dull pink.

I had thought about telling the truth. Lots of times. When my mother opened the letter. Before the luncheon. When my award appeared in the glass cabinet. But I didn’t. And then it was too late. All that year, and the next, I was afraid someone would figure it out and the humiliation would be worse than living with the lie.

I graduated. The poem became ancient history. But that feeling, of hiding some horrible secret, has hung on, more faithful than any friend. Once, when I complained that they’d given me such a lame first name, my Dad said we could change it to Desdemona, which I later learned is Greek for misery. I was pretty good at wallowing in worst-case scenarios back then. My sisters would probably say I still am.

I sometimes think of her, my unknown poetess. A walk in the garden, a playground swing or a weathered tombstone, will trigger the memory and it all comes back, so vivid my eyes tear up. But I cry pretty easily these days. Sloppy sentimentalism seems to be one of the curses of growing older. My youngest daughter just rolls her eyes.

That winning poem I didn’t write when I was nine had something to do with who I am today, with the labels I have worn on my sleeve for fifty years. The smart one, the sensitive one, the one who can write. Her one poem did that. A poem that could have been mine but wasn’t.
I only wish I could remember her name.